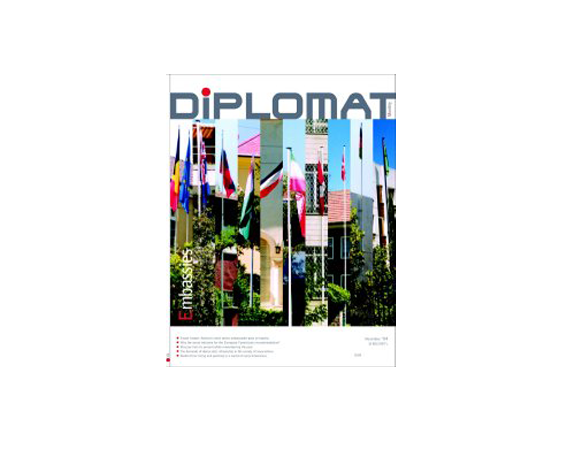 Ankara has been the capital of Turkey since 1923. for over eighty years, therefore, it has been a location for embassies and for the diplomatic staff attached to them. Yet the diplomatic community has never had a magazine of its own. In other capitals of the world,  publications of this kind have been appearing for many years, to the great benefit of the diplomats stationed there. DİPLOMAT, the magazine which you are now reading, sets out to fill the void which Ankara has suffered from up to now. Its pages are open to all embassies wishing to publicise events of any kind, to share their country’s views on any issue with Turkish Public opinion or to promote their countries’ cultural riches and touristic attractions. DİPLOMAT looks forward to hosting you all. The magazine will also from time to time carry the views of the Turkish intellectuals who shape public opinion in the area of international relations. There will be feature articles illuminating elements of Turkey’s culture, arts and tourism, and practical information designed to make everyday life in the Turkish capital easier and more enjoyable. Many new diplomats arrive in the city every year. Those who are already part of the community welcome their new colleagues and extend them a helping hand as they adapt to their new environment. As the newest DİPLOMAT joining you  in Ankara, we dare to hope that you will welcome us warmly and quickly makes us fell at home.

There could be no more appropriate subject for the keynote interview in this inaugural edition of Diplomat than Fouad Yaseen, Ambassador of the State of Palestine to Ankara. Doyen of the corps diplomatique, Ambassador Yaseen has witnessed 18 changes of foreign minister during his long posting in the Turkish capital. Yet Yaseen is reluctant to dwell on the past. “The past is important for only one thing,” he argues, “to draw the right lessons, to benefit from history and to apply these lessons in the present and the future… I am deeply convinced, and I am trying to convince my colleagues, not to talk too much about the past. If we have ten minutes to talk, let us devote two minutes only to history, four minutes to the present and the other four minutes to the future.” The following interview was conducted by Bernard Kennedy.

Q   When did you first come in Ankara?

A   I presented my credentials to the late President Turgut Ozal in 1992. I came here from Madrid. I was asked to come to Ankara for just a few months, and now it’s eleven years and a few months. I have never been bored. I have never had a sense of monotony in Turkey. Developments move very fast here.

Q   How did you become a diplomat in the first place?

A   Originally I came from the field of radio and television. I stayed something like 16 years in Cairo, where I established the Voice of Palestine radio. During my stay in Cairo, in 1974, it happened that I went to New York as representative of the PLO to the United Nations – but only for a very short period. During that time, President Arafat delivered a speech to the General Assembly. Later on, I went back to Cairo. From Cairo I went to Poland and later to Madrid.

Q   Can you tell us something about your duties as dean of the diplomatic community?

A   There is a large and cordial diplomatic community in Turkey. We have something like 95 or 96 foreign missions including the international organisations. As dean of the diplomatic community, I have bidden farewell to 128 ambassadors – 128 ambassadors who came during my time and who have now left. We have to meet from time to time to bid farewell to those who are departing. It is not easy to say goodbye to so many friends whom you have lived with for 4-5 years. Then there are diplomatic functions, national days, occasional meetings with officials of the Ministry of Foreign Affairs… Sometimes I am asked by the Ministry or other officials to give the view of the diplomatic community. And twice or three times a year I lay a wreath on their behalf. On October 29, I will lay the wreath at the tomb of Ataturk on the occasion of the establishment of the Republic.

Q   Do you feel that the Palestinians are receiving sufficient support from Turkish officialdom and Turkish public opinion?

A   The more I am in Turkey, the more I feel that we are closer to the Turkish people, the Turkish government and the Turkish parties. I am fully satisfied with the support of our brothers and friends here. I use these words carefully. Sometimes you are obliged to accept your brother even if he is not good to you. But you are able to choose your friends. In this case, we have brothers and friends at the same time. We have excellent relations. They are doing the best they can to support the Palestinian just struggle, not just with lip-service but with assistance in the fields of culture, education, medicaments, health and many other areas, and from time to time with donations to the Palestinian people. Things are going the right way in bilateral relations.

Q   What activities are under way at present in Turkish-Palestinian relations?

A   A large delegation from the Palestinian-Turkish friendship committee of the Palestinian parliament recently visited Turkey at the invitation of Mr Huseyin Tanriverdi, the chairman of the corresponding Turkish parliamentary committee. They were received by Prime Minister Tayyip Erdogan, Foreign Minister Abdullah Gul and speaker of Parliament Bulent Arinc. We are now hoping for a one-day working visit from a very high-ranking delegation headed by Prime Minister Ahmed Qureia, together with Mr Nabil Shaath, the Minister of Foreign Affairs.

Q   Are you hopeful about the prospects for a Palestinian homeland?

A   We are not allowed to lose hope. Hope for any individual is very essential, but for the Palestinian, hope is his life. Let me add that occupation is the highest and most severe standard of terrorism. Any terrorist action might take a few minutes or days, but occupation is continuous against the whole population. There can be no solution without an end to the Israeli occupation. Nevertheless we are still hopeful that at the end of the tunnel the light will come. Of course, the sooner it comes the better, to save the innocent souls on both sides who are the real victims.

Q   How do you see the tensions in the Middle East more generally, including Iraq?

A   The Middle East was so called by the British empire. They considered Greenwich, London, the centre of the World, and they classified the World accordingly. There was the Near East (nearest to London), the Middle East and the Far East… They then partitioned the region into small states. The Ottomans had not done this. If the Ottomans had fragmented the region into small pieces, they would have stayed there for 1,000 years more in their capacity as the Ottoman Empire. But they didn’t do it. Since the well-known principle of divide-and-rule was introduced, this part of the World has not enjoyed any stability. Without stability you cannot achieve any progress; without progress and prosperity for the people of the region you can never have security, and without security you cannot reach peace. This is the case of the Middle East. From the moment the British started to focus on the so-called Jewish problem, and to see the solution in establishing the state of Israel, the whole situation – especially in the so-called Fertile Crescent, including Syria, Lebanon, Iraq, Jordan and Palestine – was marred by military coups and instability.

Q   What can the Western powers do to find a solution?

Q   You have also served in Spain and Poland, two countries which have joined the European Union. Have you any feelings about Turkey’s efforts to join the Union?

A   During my time in Madrid, the Spaniards were seeking to join the European Community. And fortunately they achieved their goal during my stay. But I remember the slogan of one very prominent author and writer who believed the Spaniards were crazy. He said that Spain used to be the crown of Africa and the tail of Europe. And he could not understand why the Spaniards preferred to be a tail instead of being a crown… In the same way, Turkey can be a crown of this part of the World. 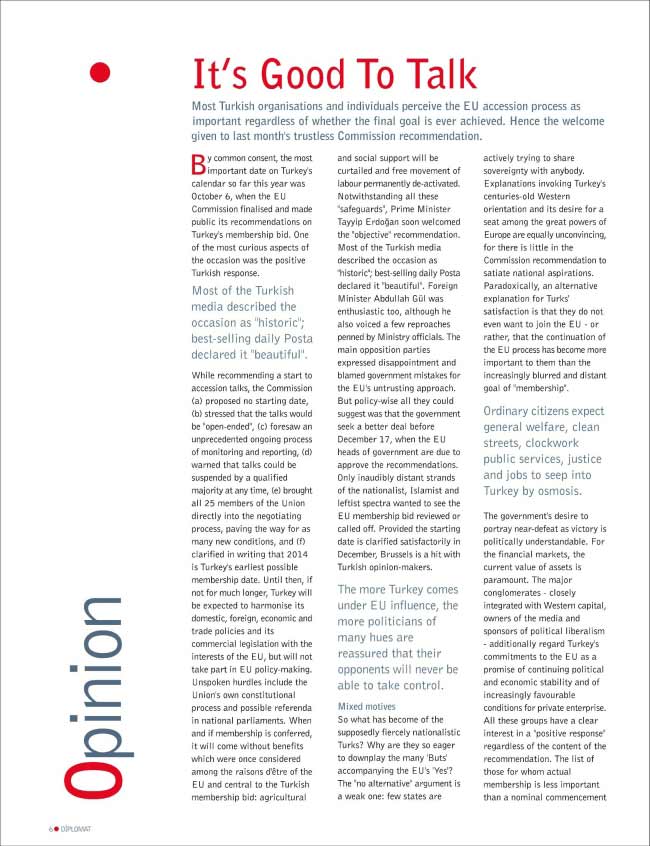 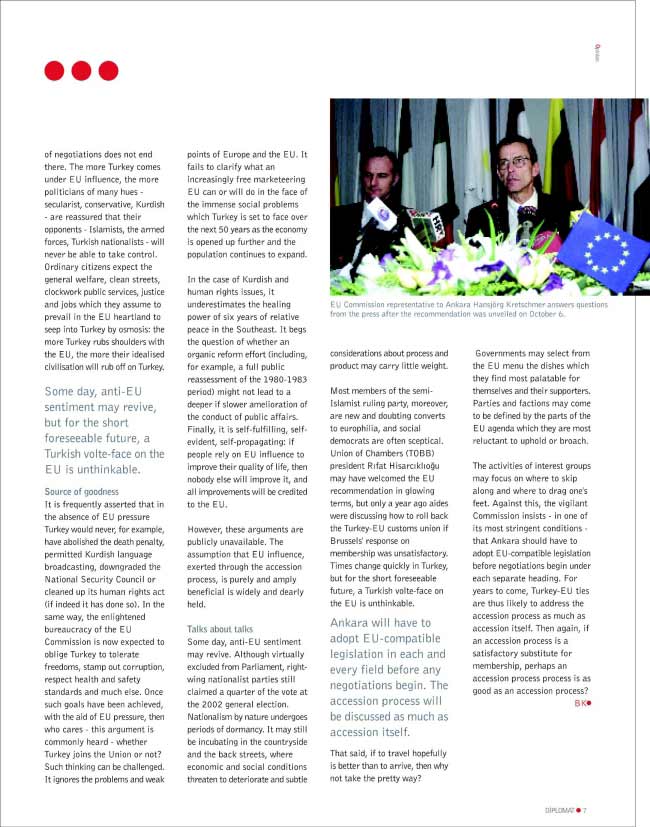 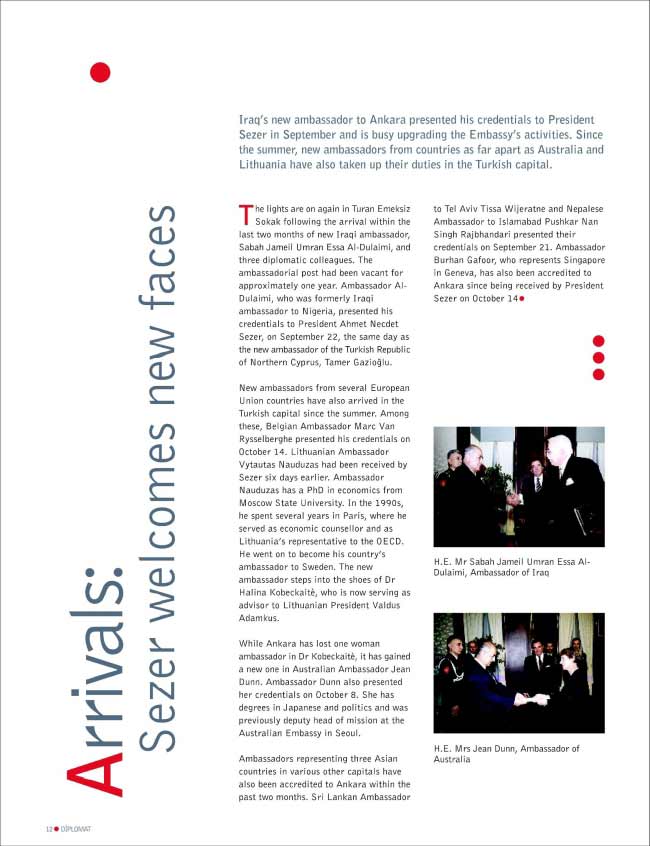 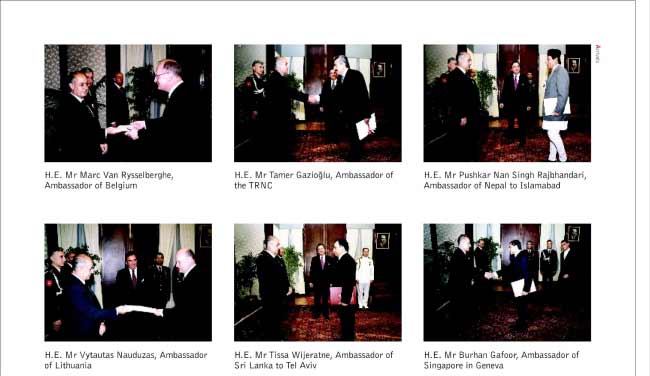 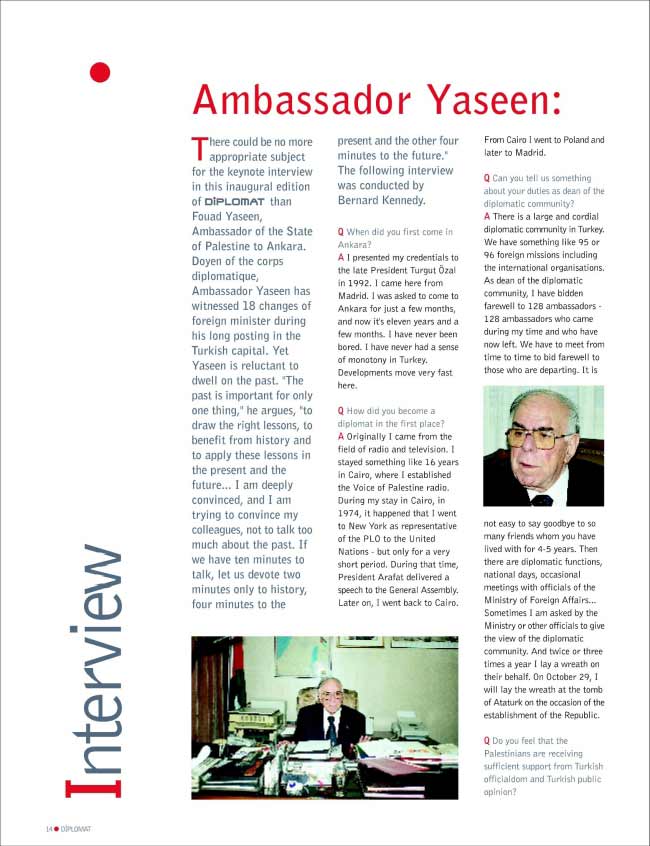 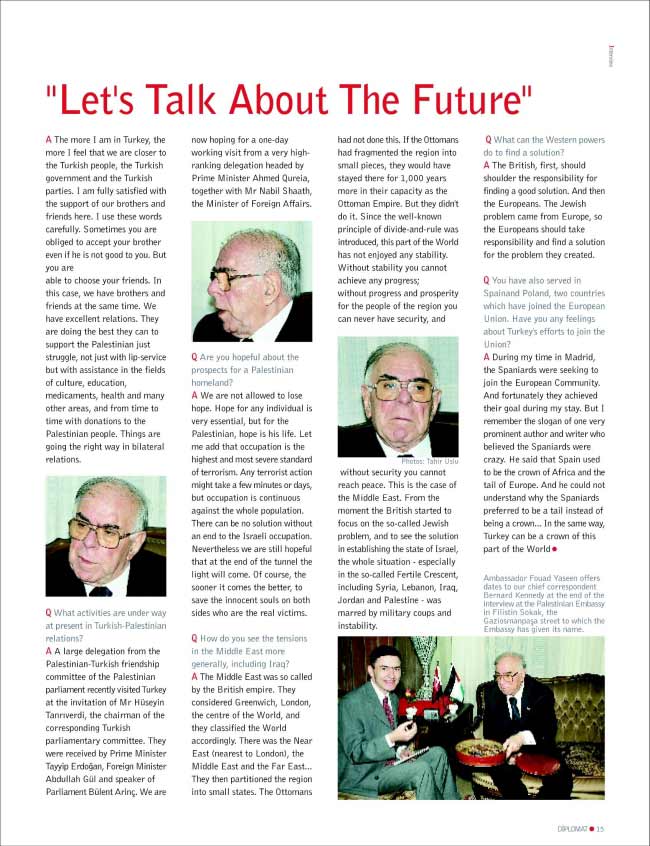 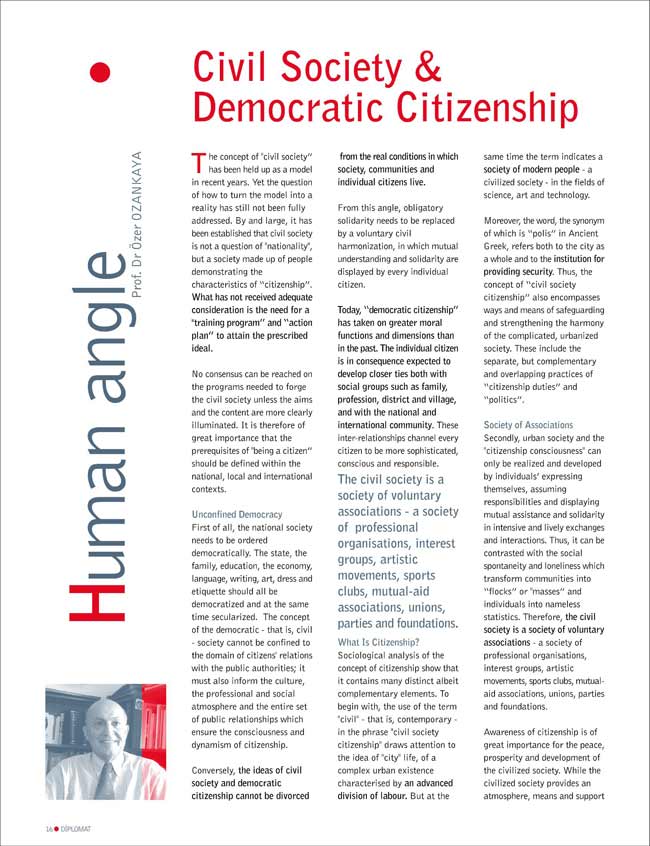 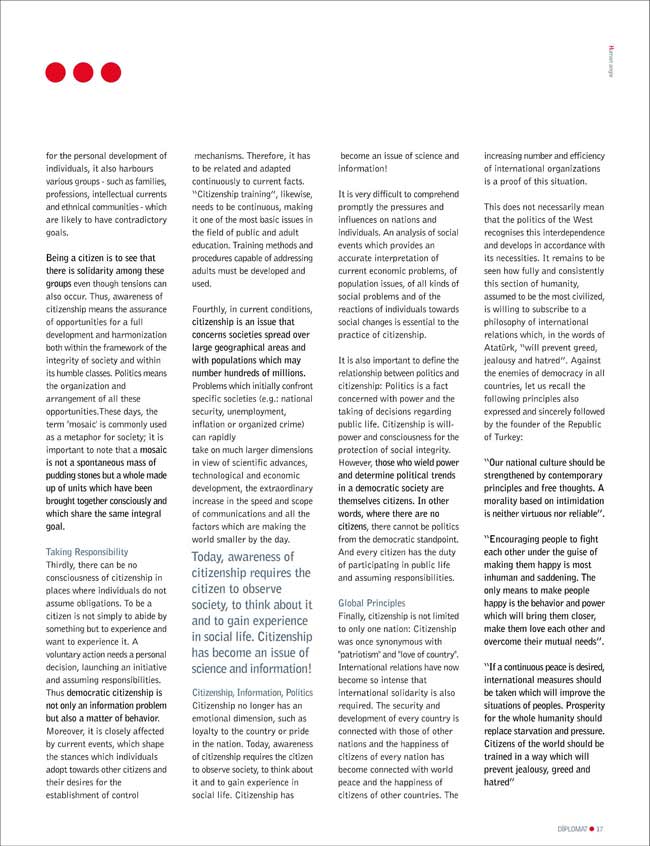 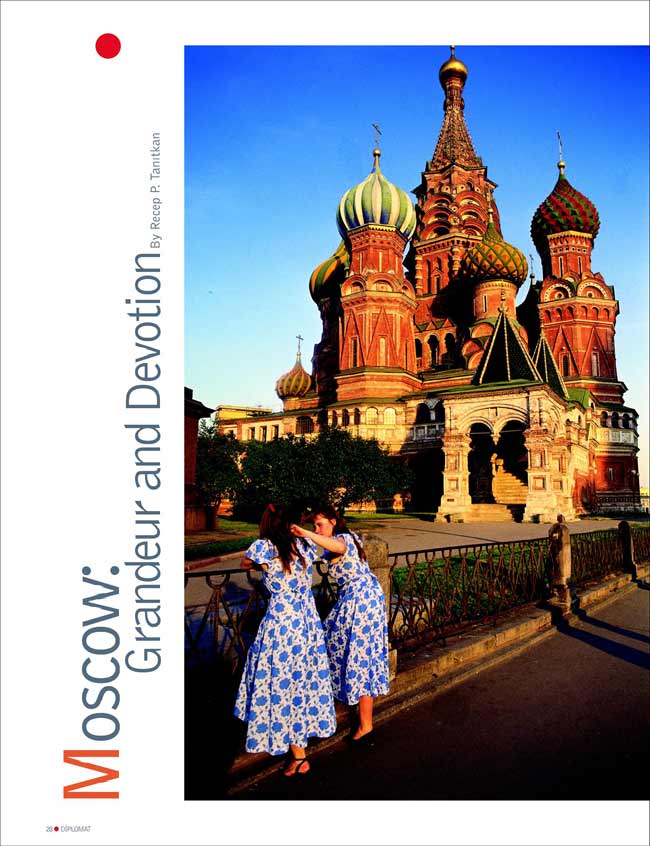 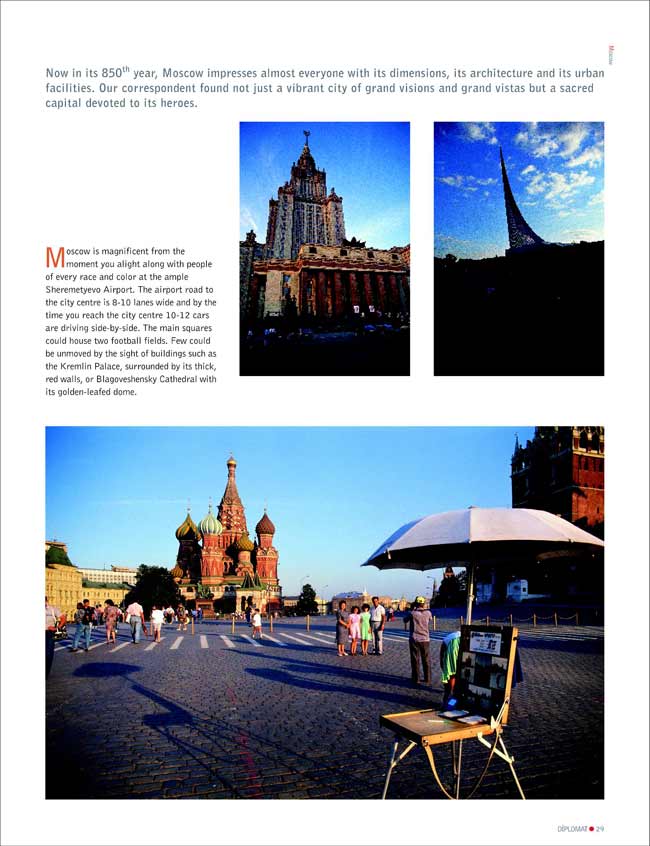 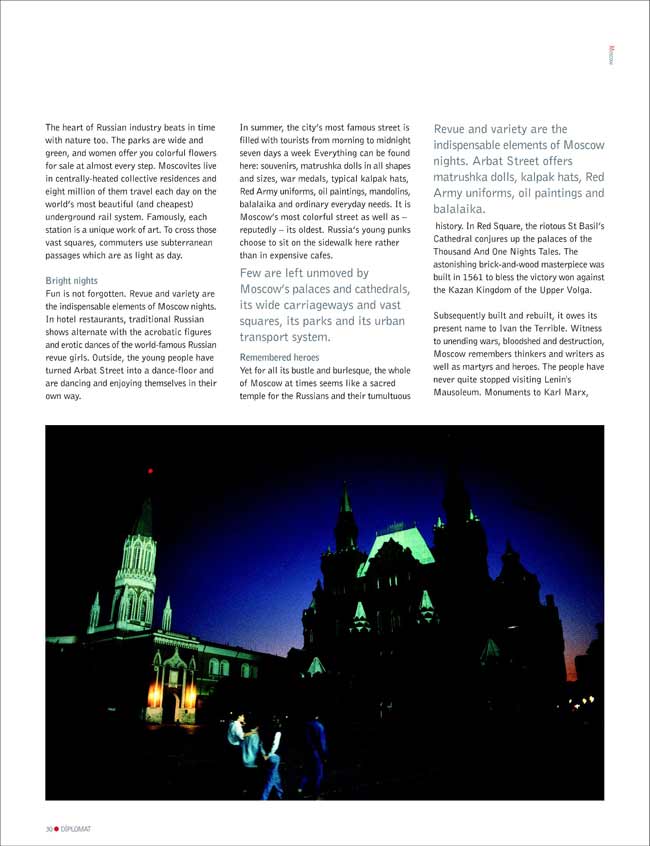 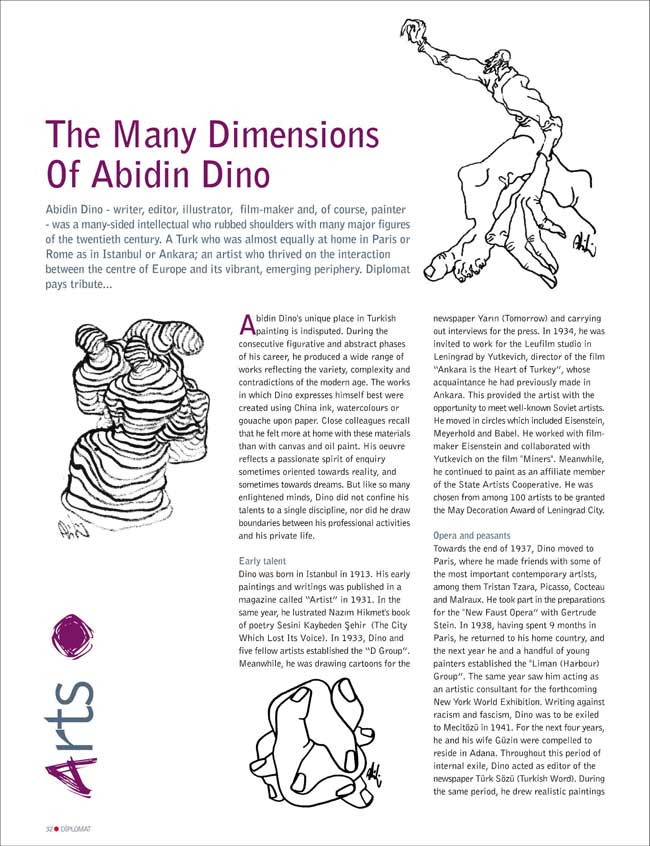 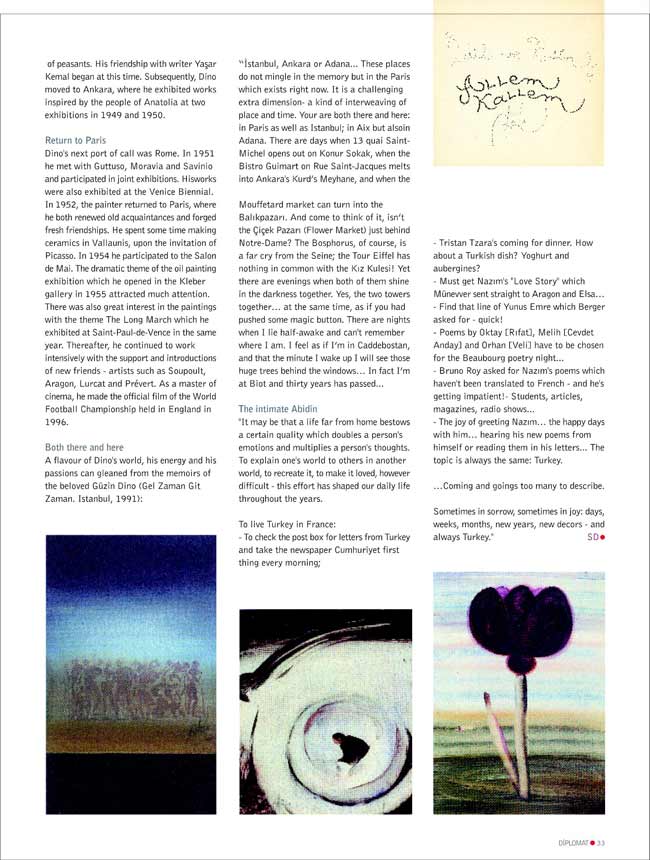 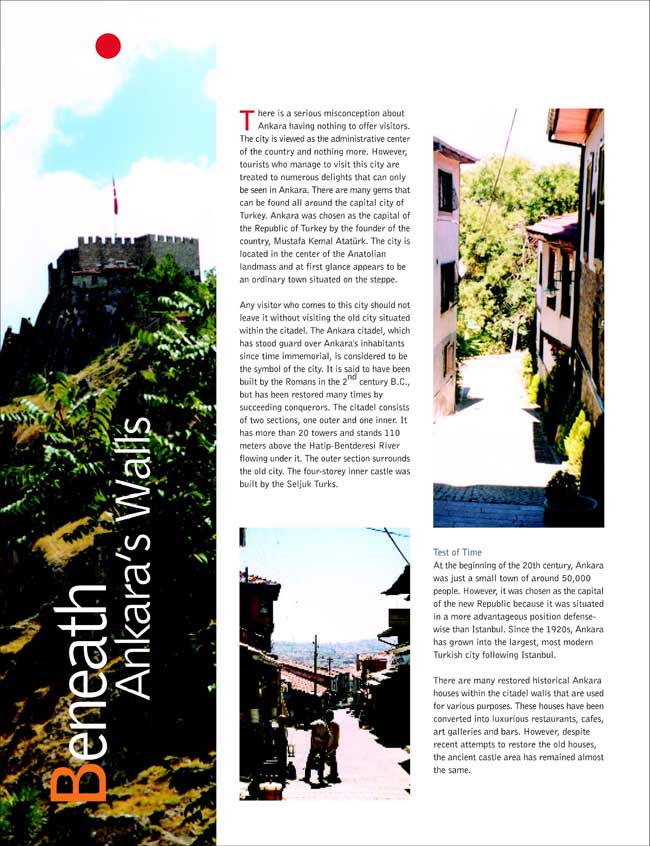 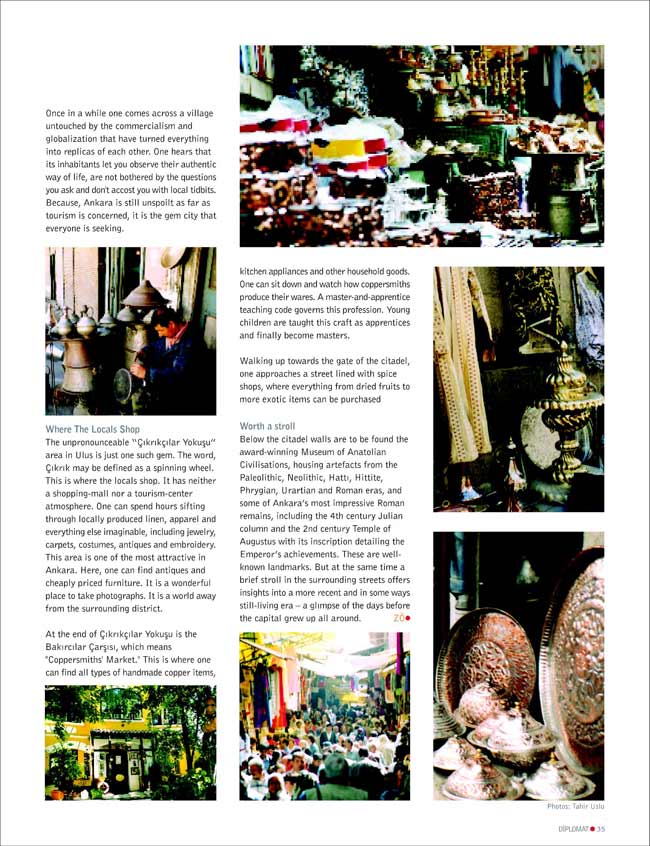 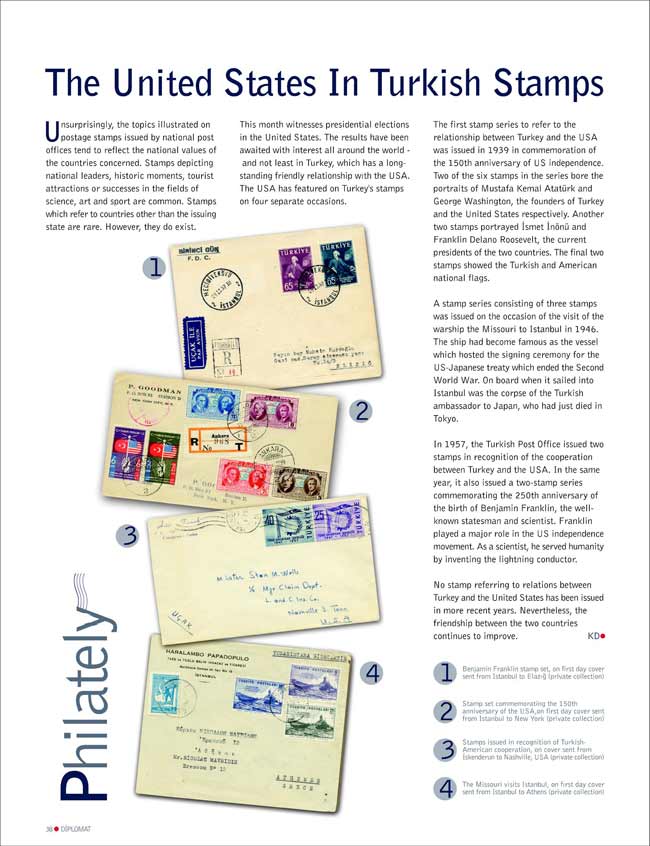 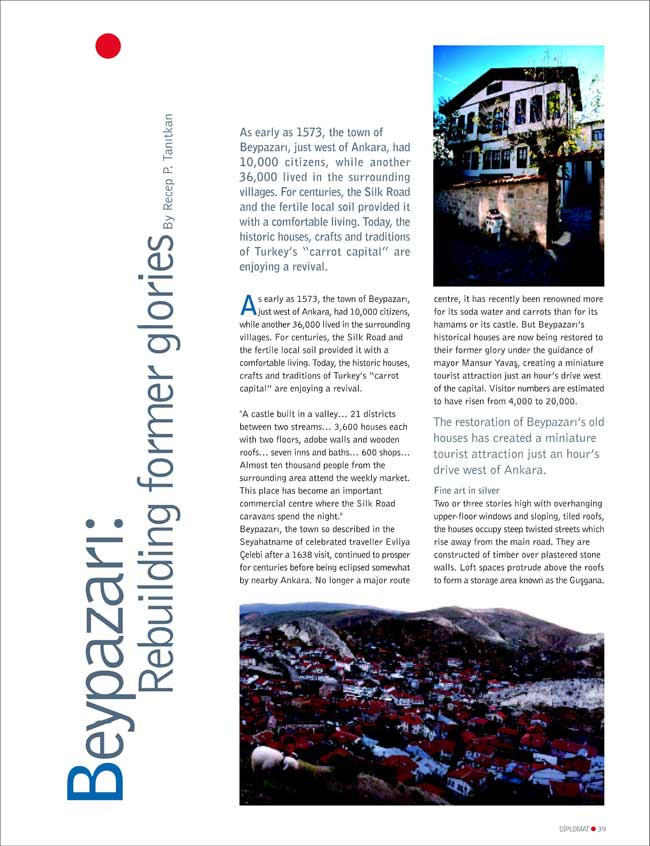 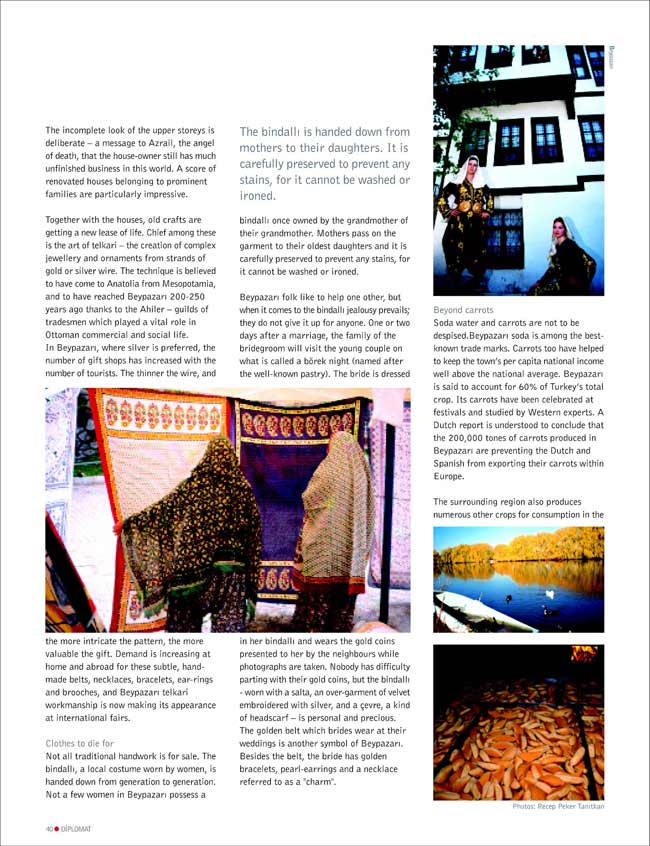 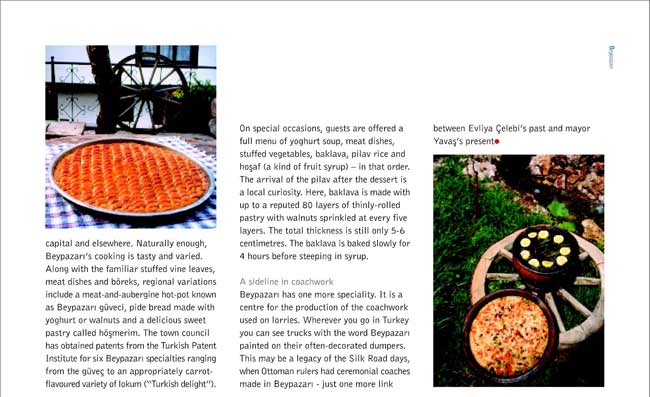 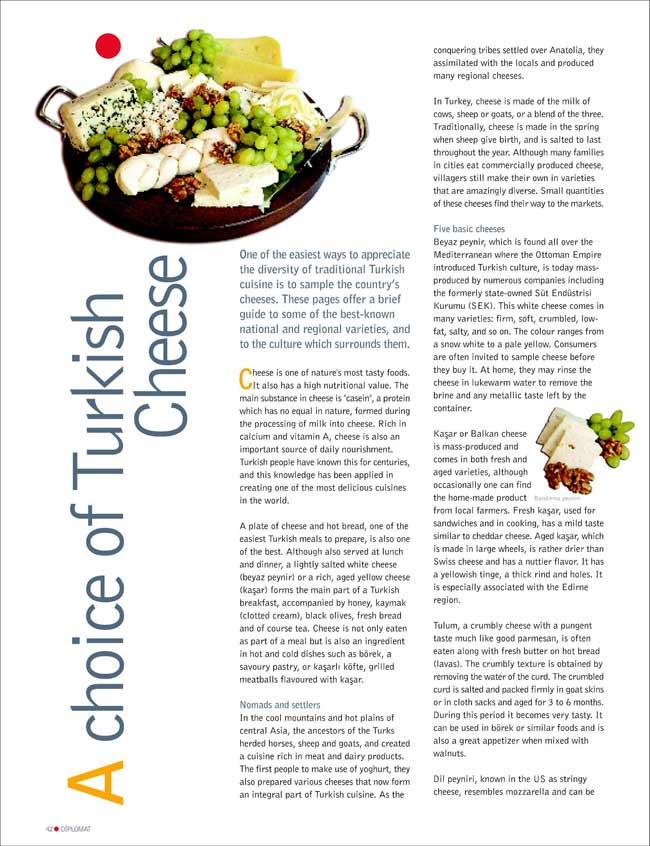 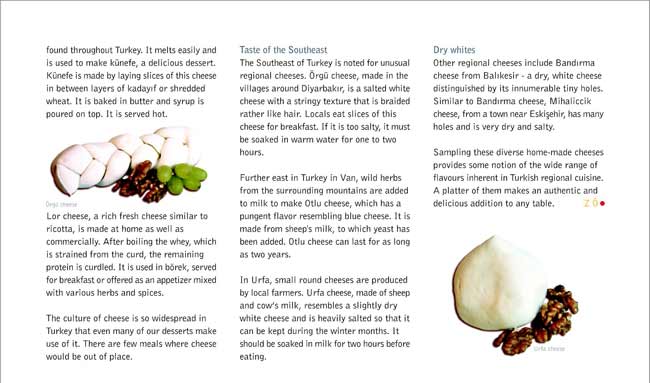 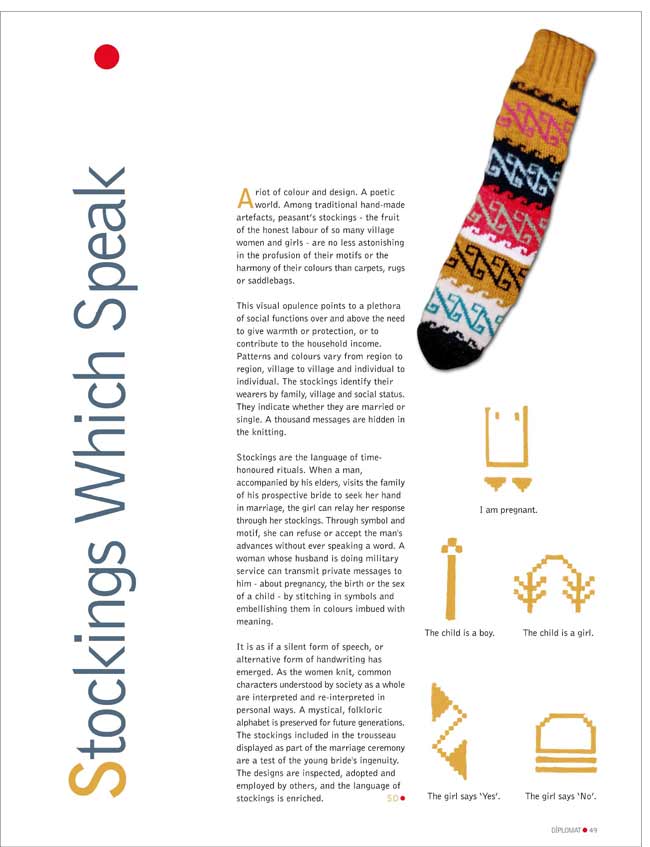 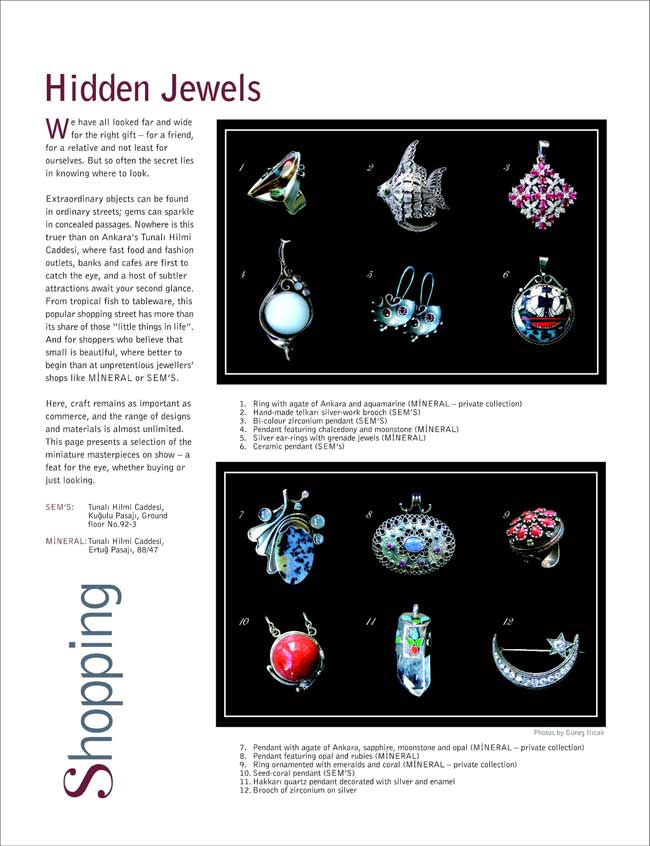